At CRC, we always have something going on! New products, upcoming events, collaborations, exciting articles and lots of other fun stuff. We also have a newsletter for you to sign up to if you fancy some enjoyable letters on your virtual doormat.

CRC Industries has appointed Len Mazzanti as Chief Executive Officer. Mazzanti has 30 years of experience developing and leading high performing teams on a global scale.
He will be focused on driving operational excellence and infrastructure capabilities to support CRC’s growth around core product lines, including their environmentally preferred products.

“I’m excited to work with the CRC team to share our compelling programs and new sustainable initiatives with our customers and distribution partners.”

The 16th of May this year was a bit more windy and chilly than usual. But on Heden in Gothenburg, where CRC 5-56 Stadsgirot took place, the temperature was warmer. This year was the first year that CRC sponsored the popular 60 km bike race. And thanks to our 500 contestants who defied the weather, it became a fantastic day! Beginners and experienced riders all gathered together and pedalled their way through city environments, parks and greeneries. 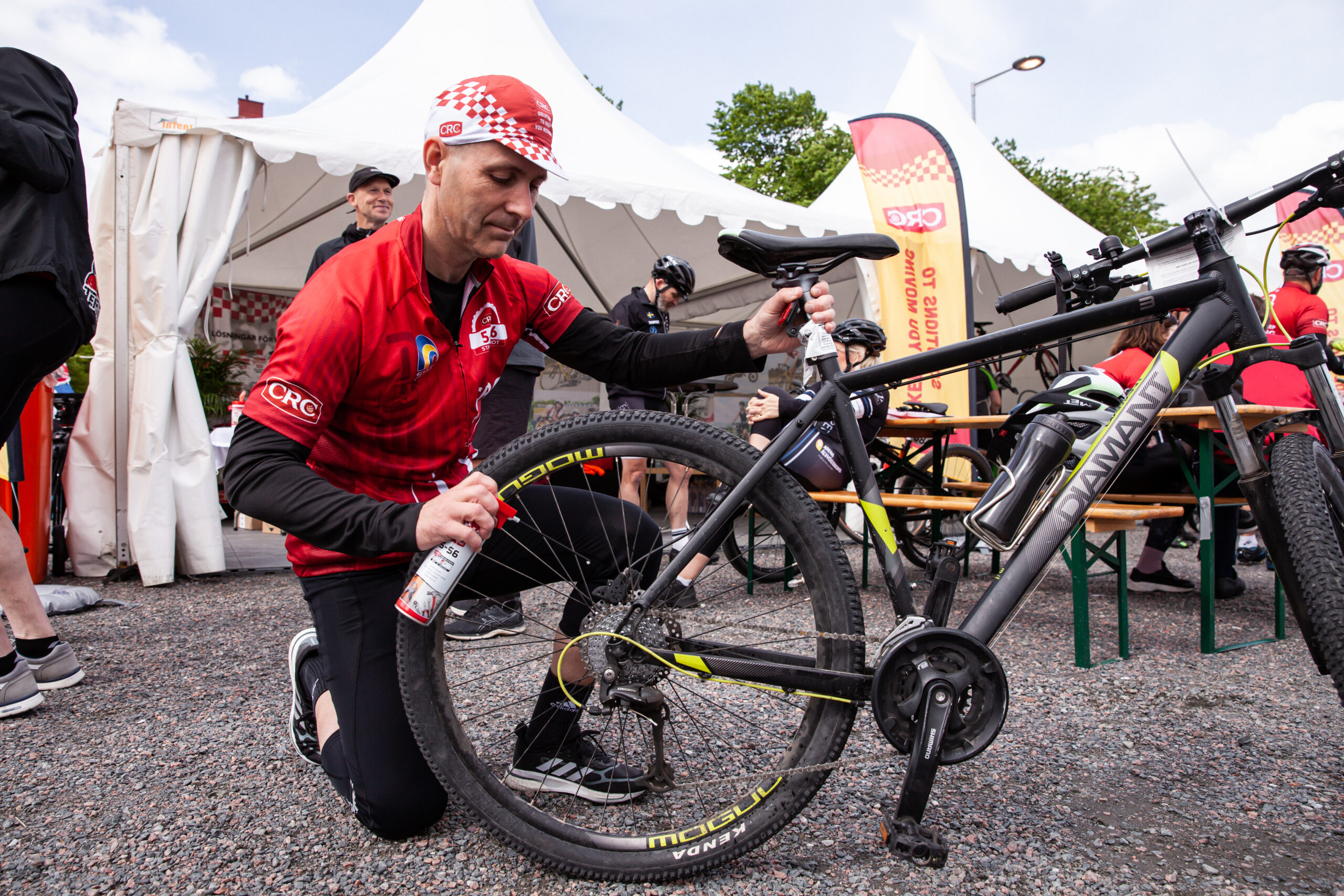 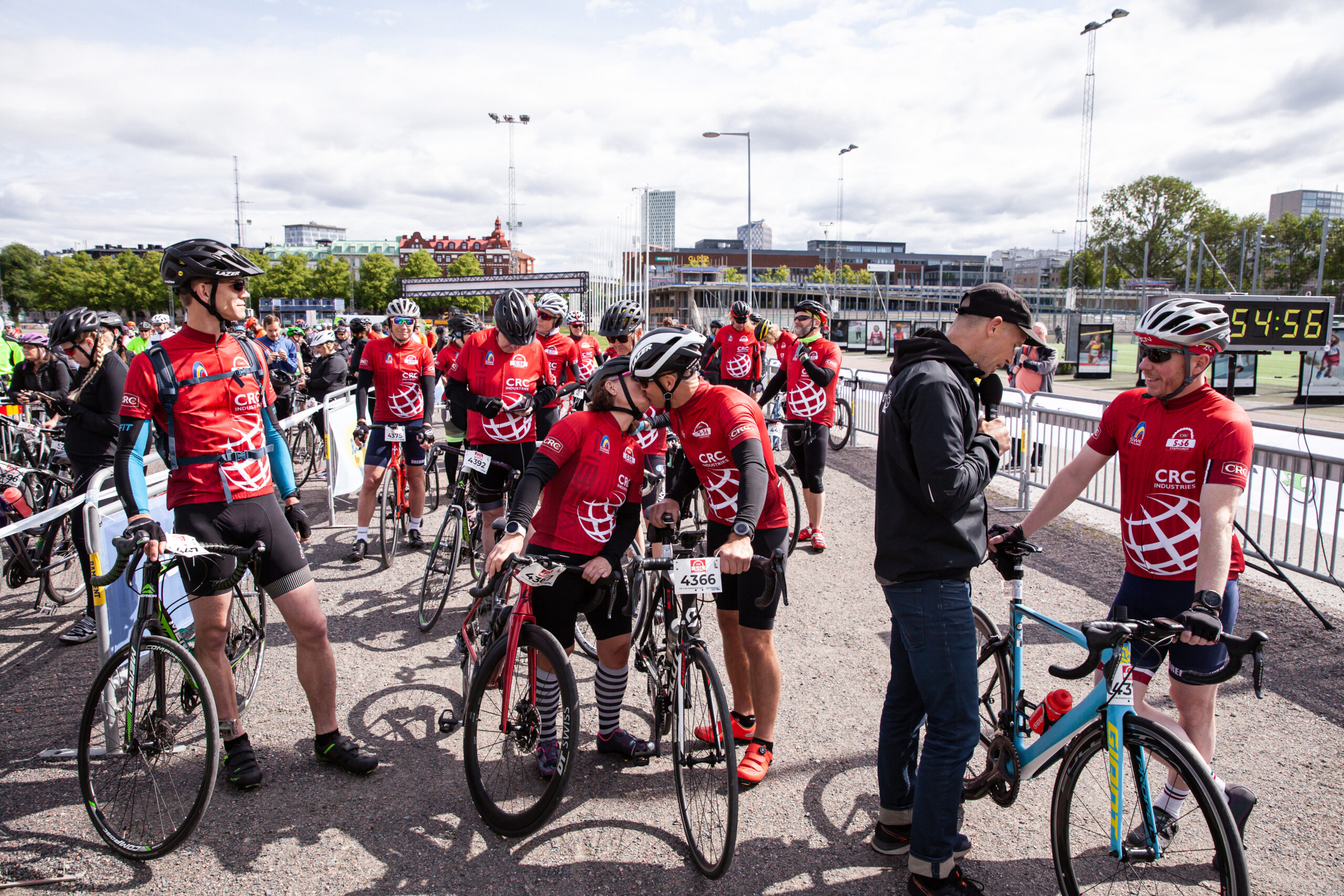 During the day and along the track, we helped the cyclists to look over their bikes with CRC products, such as the multi-spray 5-56 and Bräkleen. We also launched something new! Not a product but definitely a social glue, our phenomenal mascot Fixie! Fixie is a joyous character and helped us out during the day to boost positivity and energy levels. 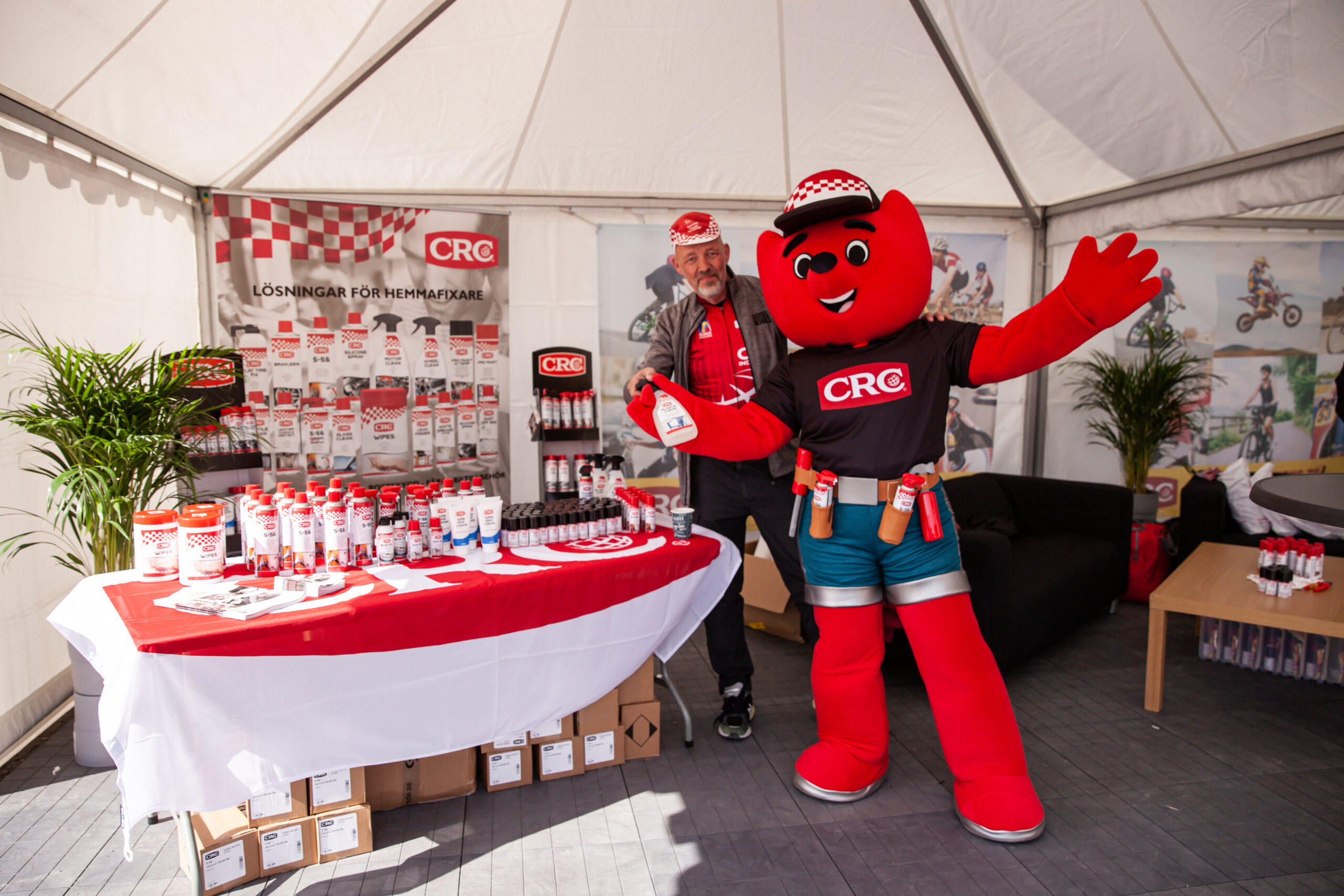 Svenska Cykelförbundet founded Göteborgsgirot to tie together the city and let people experience all parts of town from the saddle. And just like Göteborgsgirot, we at CRC want to promote the bike’s place in society. With our experience and broad line of bicycle products, we also want to raise awareness of the importance of good maintenance of one’s bike. 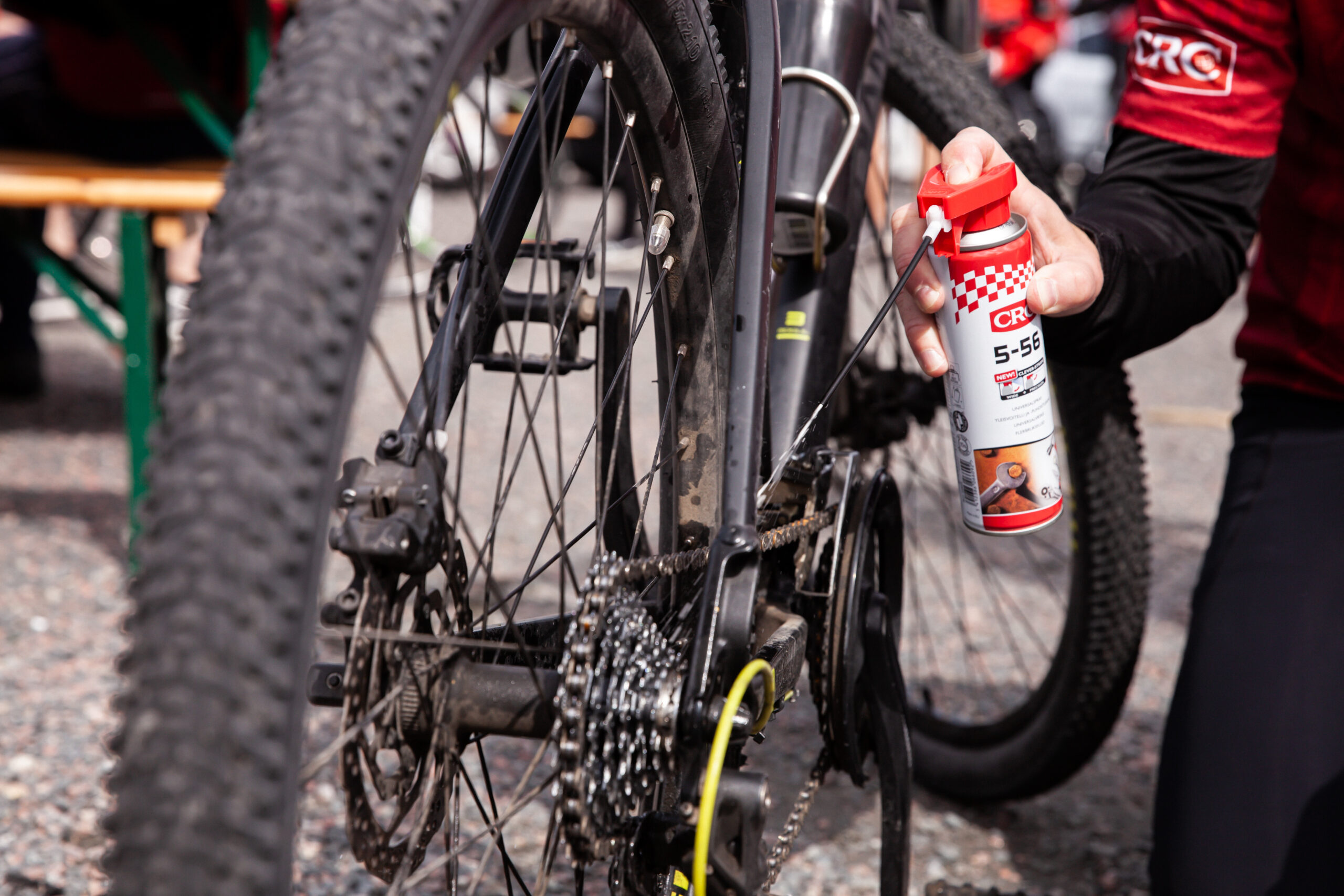 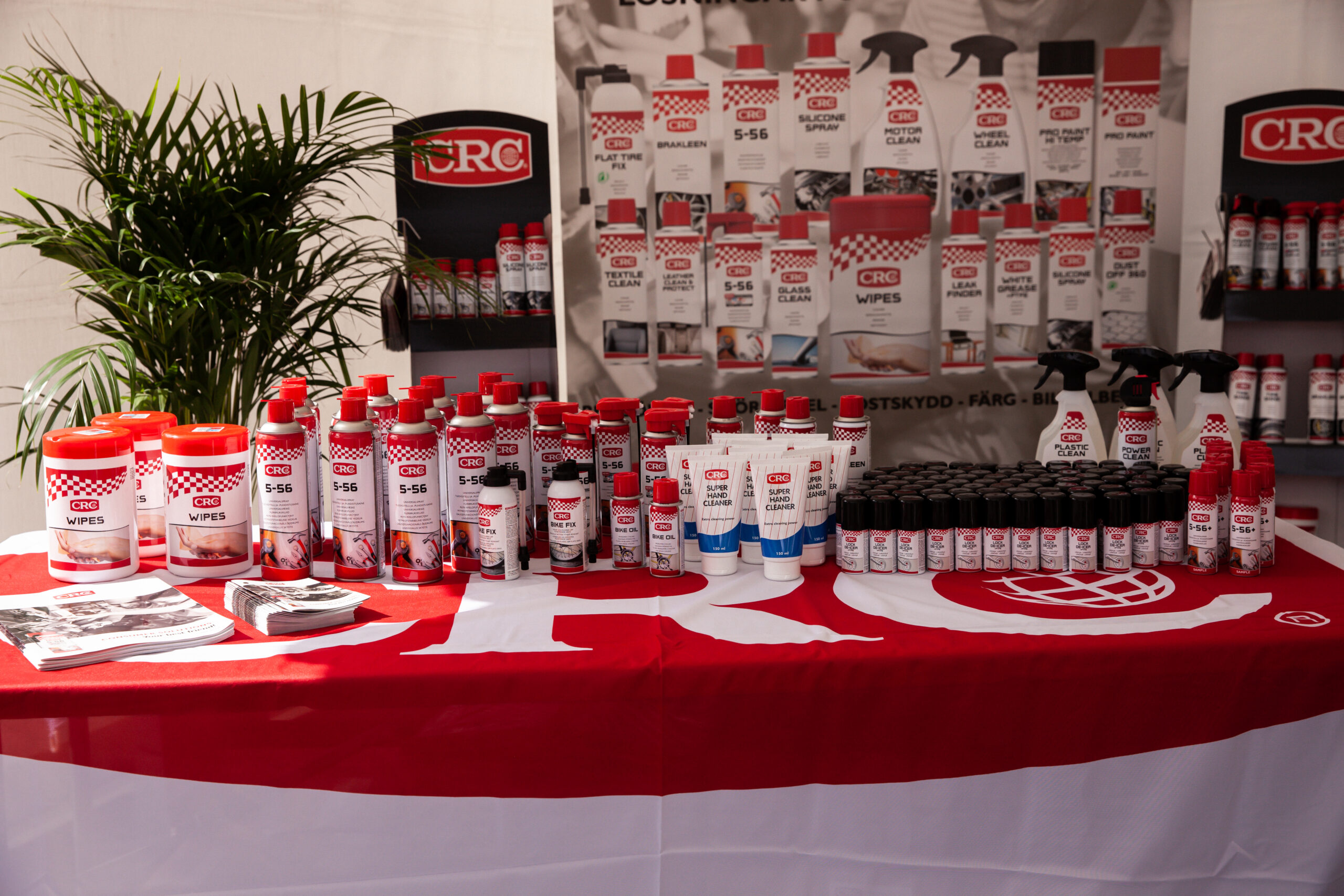 A huge thank you from all of us at CRC to all the contestants! We’ll meet again next year!

Nadine Kåmark truly is a woman playing in a different kind of league. Not only does she compete for the Swedish national team in trial cycling, but she also holds an impressive silver medal from the World Cup 2017. As if these achievements weren’t enough, she has also studied the civil engineering program at Chalmers while working on the side. A power lady indeed.

Today Nadine works as a calculation engineer, and at the same time puts a lot of effort into growing trial cycling as a sport in Sweden. Both via her work at Partille Trailclub where she arranges training camps, and also by promoting the sport through performances and shows. Today trial is a minority sport in Sweden, while it’s huge in other countries such as Spain. This means that most competitions are arranged abroad.
When competing and training, the condition of the bike is vital. The gear needs to be in top condition for safety and achieve good results. And this is where CRC comes in. With our broad range of products, we can help Nadine ensure that her equipment is prepared to deliver. With Nadine’s great experience in cycling, we hope to further improve our products for the cycling segment – so that both you and Nadine can go as far as your bike takes you. Safe and sound.
Top 3 tips from Nadine to keep your bike in mint condition:

• Look over your bike regularly. Once a year is too rare, it should be done at least once a month.
• Pay attention to any rattles or squeaking sounds, that’s not how it’s supposed to sound. You may hear that something needs to be tightened or lubricated with 5-56, to prevent breakage.
• Check that your tires are well pumped. You’re just wasting your energy biking with tires without enough air pressure.

Latela is a Finnish TV show where we follow the motor fanatics from Tampere who throw themselves into all kinds of car-related projects. During the last decade, we’ve watched them turn a wreck into a showstopper in under 30 days for only 3,000 EUR. We’ve also seen them turn a pick-up truck into a gift table for Justin Bieber fans. As well as the time when they custom-fit a sound system worth 50,000 euros.

The guys are currently shooting their 7th season and we got a chance to talk with them about their collaboration with CRC – a partnership that’s been ongoing for many years and which we are both very proud of. Because if there’s any product the guys use to solve a problem in the garage, it’s one from CRC. Every time they’re in their garage, they use at least one product from CRC, and some of their favourites are Brakleen, Rust Off and 5-56. And why is that? Well, as they say themselves: “When you work with old cars, there’s always rust”. The first time they came in contact with CRC products was when they were teenagers, working on their mopeds, and someone always yelled: “anna CRC”, which means “give me CRC”. According to them, CRC is so well established in Finland that you can go out on the street and ask anyone what CRC is, and they know exactly what you’re talking about. But as we said, the guys are in the middle of shooting, so we’ll let them get on with their next adventure – whatever that could be! Yesterday they were mining for gold and diamonds… For us, non-Finnish speakers, the 6th and 7th seasons will be released on Discovery+ this autumn, where we’ll also be able to see their two spin-off series. However, if you do speak Finnish, seasons 1–5 can be found on Yle. Or you can get a sneak peek of their world on their Instagram, latelasuomi.

After 30 years as a competitive driver in drag racing, Micke Kågered truly has made a name for himself in the sport. Today his helmet is placed on the shelf, but he continues being part of the motorsport world with his team in the Porsche Carrera Cup Scandinavia.

Beyond his work as a team manager for Kågered Racing, Micke also works as a lecturer. So far he has given more than 200 lectures at 90 different vehicle, truck and engine high schools in Sweden. And this dedication of his is something that we at CRC are proud to support. Together with Micke, we spread the knowledge of 5-56 and our other products and how they simplify, improve, and extend the life and function of all types of vehicles.
Micke himself was introduced to 5-56 by his father, and the red and white coloured tin has followed him ever since. He now uses 5-56 almost daily for cleaning, lubrication and everything in between. When preparing his Porsche Carrera for a race day, 5-56 is an obvious choice, and the tin has a reserved spot in his tool bag when heading to the track.

Once again, we at CRC are very proud to collaborate with Micke, and we look forward to following Kågered Racing’s success on the track.

Necessary cookies
Necessary cookies enable core functionality such as security, network management, and accessibility. You may disable these by changing your browser settings, but this may affect how the website functions.
Manage options Manage services Manage vendors Read more about these purposes
View preferences
{title} {title} {title}